A magnet is a piece of metal or rock that is able to push (repel) or pull (attract) other metals. The force that causes this push and pull movement is called magnetism. Similar to electricity and gravity, magnetism is an important (and invisible) natural force. One of the many neat things about magnetism is that it works over distance, meaning a magnet does not have to be touching a metal object to actually move it.
Although magnets are very clever, they can’t move every material we find around the house. They are not able to pull things like paper, glass or fabric. They can only move things made of iron or that contain iron, nickel and cobalt. So if you were to try and attach a magnet to something plastic or to your clothing, it’s just not going to work!
The majority of the magnets that we use are man made. There are however some naturally occurring magnetic rocks called Lodestone that can be found on the Earth’s surface. Lodestone are chunks of special rock known as magnetite that have been exposed to a strong magnetic field from a bolt of lightning that has struck the earth. Lodestone has been found in the USA, Canada, Mexico, Italy, Finland, Austria, Romania and India. 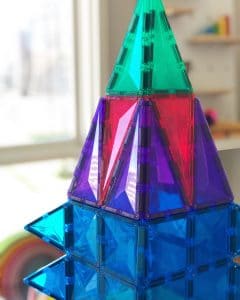 If you look at your Connetix, the magnets are the small black rectangles located around the edge of the tiles. While the magnets that are safely tucked away within the layers of your tiles are small rectangles, magnets can actually be made in all sorts of shapes and sizes. I am sure that you have other magnets in your house – maybe on your fridge or a noticeboard, holding all your important messages and reminders.
Magnets are pretty cool things and are really useful in our everyday lives. Magnets are used to make sure the doors on our microwaves, refrigerators and freezers seal tightly. They also power the speakers in stereos, earphones and televisions. Magnets are also used to store data in computers and are important in scanning machines called MRIs that doctors use to look inside people’s bodies. Did you know that over 80% of refrigerators around the world are decorated with magnets. Is your artwork held in place and displayed on your fridge using a magnet?

Magnets have been used by humans for hundreds of years. It is thought that the Ancient Greek people first discovered magnets. An encyclopaedia published in 77CE (a VERY long time ago) cites that a shepherd named Magnes was herding his flock on Mount Ida and noticed that the nails in his shoes clung to the rock on the mountain – this rock was later called magnetite ore. Later on, Vikings used magnets to make the compasses that allowed them to navigate across water and conquer new lands. To this day, every ship sailing the oceans uses a compass to help sailors determine direction. Each of these compasses is driven by a magnet!!

How do magnets work?

Magnets can do all these cool things because they have at least two magnetic poles. ‘Pole’ is just a scientific word for side when we are talking about magnets. One pole or side of the magnet is called the NORTH pole and the other side of the magnet is called the SOUTH pole.
If two magnets are pushed together, they will either attract each other or repel each other depending on which poles are closest. Like poles will always repel each other. That is, two north poles will push each other away. Two south poles will also repel each other.
With magnets opposites will always attract. That is, a north pole will attract a south pole and vice versa. When we say attract, what we actually mean is that they will jump towards and stick to each other.

How do the magnets in Connetix work?

The magnets in your Connetix work using all these scientific principles! So if you try to build or stack two tiles together, if the same poles are next to each other the tiles will repel against each other. This means they won’t stick and you will have to flip one of the tiles over so that the opposite poles are next to each other. You can’t tell by just looking at the tiles or the magnets, which pole is which, but you will certainly feel the pull and push forces – it’s pretty cool!
You may have also noticed that most of the time your Connetix always click together, regardless of their orientation. This is because the tiles are specially designed so that the magnets on each side of the tile are orientated in opposing directions. One tile side houses the North pole on the front side and the other has the North pole on the reverse side. The alternating pattern is why the tiles always find a way to stick together.

Now that you know how cool magnets are and how important they are in our everyday lives, I bet you can’t wait to start playing! Is there any more information that you would like to know about magnets? Let me know in the comments and I will try and answer them for you!