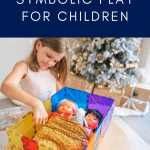 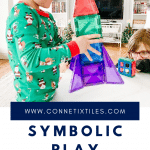 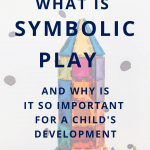 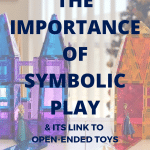 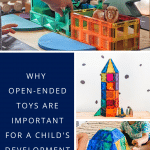 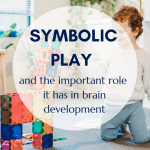 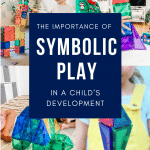 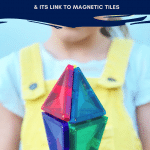 What is Symbolic Play?

Symbolic play is when a child uses objects to represent other objects in the world around them. Essentially, they are using their imagination and ‘pretending’. For example, when a child picks up two Connetix tiles and announces, “look at my new glasses!”, they are using the tiles as a symbol for another object in their play.  In this instance, they are using Connetix as glasses. Symbolic play also is about using ideas and actions to represent other ideas and actions in their play. Such as using a type of gesture or action in their ‘pretend play’.

Symbolic play has long been recognised in research as extremely important in many areas of childhood development. It has been noted to develop many areas of a child’s brain, such as their senses, expression, language, social skills, movement, problem solving, reasoning and learning. By encouraging your child to play in this manner, you are helping develop many areas of their brain.

Symbolic play is usually a natural skill that can be picked up with adult modelling and just simply being around other children. Symbolic play has also been used as an intervention tool for children who struggle with some of these areas of development. For example, children who have been diagnosed with social or language difficulties have been immersed in programs with the aim to help develop their symbolic play.

You may notice why language is developed during this kind of play… when you think about your child ‘playing pretend’, you may notice them talking to themselves as a narrator or talking for objects in a character voice. This incidental learning occurs so naturally, you may not even realise it is happening.

Symbolic play is not something that should be hindered… this may be detrimental to your child’s cognitive or emotional development. By hindered, I am referring to an adult saying something like: ‘don’t be silly… that is NOT a boat, it is a BOX’ to a child who is pretending. This may prevent them from developing areas of their brain that they were working on at the time and can be quite detrimental to a child’s confidence. 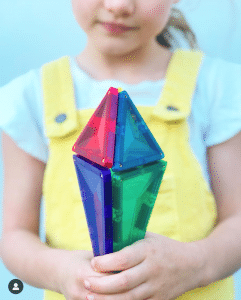 Symbolic play is not something that should be forced, it is something that should be modelled and encouraged. For example, to encourage this type of play, you may put out an empty box and announce to your child “wow, look at my new car”, and you jump in, making car noises. Watch their faces… their faces may just light up and jump in the car as well… or they may suggest a symbolic role change, in that “it’s not a car, it’s a boat!”.

Just by joining in, you are validating to your child that this kind of play is important, and you are telling them that they are important as a person. It is such a meaningful experience for all involved.

Connetix tiles are an amazing open-ended toy that encourages this use of symbolic play. Having the opportunity to build the magnet tiles into anything they can imagine, can open doors for meaningful symbolic play. You may notice your child turning the magnet tiles into people, places, objects or possibly an older child may substitute the toy for something more abstract, such as a feeling or emotion.

The most common symbolic play would be an object. Here are some examples you may notice your child making with Connetix Tiles. Alternatively, you may wish to set up or model some of these symbolic play objects. An ‘invitation to play’ set up could include an adult setting up train station or a market stall in a ‘ready to go’ approach. Invitations to play can direct children into their own self-directed symbolic play, helping them to express themselves creatively by extending or modifying the original invitation. It is used more as a prompt than a directive approach.

So the next time you see your child using Connetix as a substitute in their play, they aren’t just playing, but developing key areas of their brain through symbolic play.

Frankie is the creative mum over at @talk_and_play_mama. She is a qualified teacher and literacy specialist on maternity leave and currently spends her time enjoying island life with her family.